Japanese White Pine 1987 to 2015
Whilst sorting out boxes of photos this afternoon my wife Susan came across one of my Japanese White Pine which must have been taken soon after I acquired it in 1987 from the widow of a bonsai dabbler. 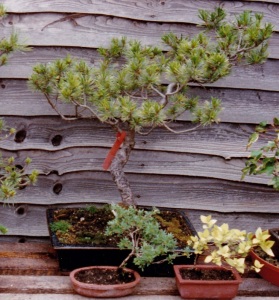 I feel I really must apologise to this tree for
then neglecting it for years whilst I concentrated on my career as an artist, running my gallery and keeping a roof over our heads as the children grew up. 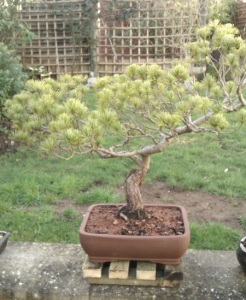 It has only been  in recent years, now that I am semi retired that I have taken the time to do more than just keep the tree alive for as you can see by February 2014 it had been turning into a bush rather than a tree, it was time to take things seriously now.

So taking the tree in hand and some wire in the other hand so to speak, I set about trying

to add some style to my long neglected pine. After a fair bit of work, turning it this way and that, trying to think what would look best where, I ended up with this my first serious wiring job . 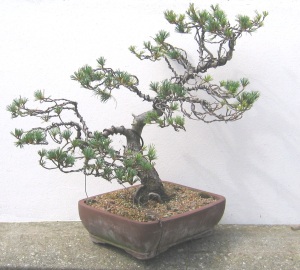 Looking at what I had created I was not at all happy, it just wasn’t what my eye as an artist had in mind when I thought of bonsai.
Despite  pouring over bonsai books over the years I didn’t seem to have learnt much at all but fortunately it was about this time that I joined Taunton & Somerset Bonsai Club. There I had the advice of a few ‘old hands’, members far more experienced than me in world of bonsai. They gave me the courage to take off a branch or so, something novices are often very reluctant to do, to change the viewing angle and the inclination of the tree and we were soon on the way to something better.

During this summer of  2015 I fed the tree frequently which I knew would result in needles longer than is desirable but it had been looking very weak and it really needed a boost and I also took it along to  one of our members Adrian for some more words of advice and as you can see from the photos it is now far removed from the bush that it was in danger of becoming.

From the back it was rather bare ( a common fault when trees are grown against a wall or fence and seldom turned) so I wired that middle left branch round and it also had a very ugly graft  which had resulted in a very visible  heavy round collar the join which I chamfered down to make  less noticeable.

I was getting rather nit picky now as I was looking at this latest photo and realised that it was a little too far to the left re the balance of the foliage and so the latest and probably final trim this summer was to take a little off that lower left branch and the one higher up behind.

(Looking at your trees in a photo often helps make one aware of some styling fault which is not always obvious when you are working right on top of it.)

So here is the last photo of summer 2015 taken at the end of September and I hope that I now have the chance of making it a really good tree in the next few years. Thanks to Ade and to Sue for finding that old photo, just one of many memories she dragged out of that box of photos on a Sunday afternoon.

Update to this progression  December 2016

class and helped me win the overall First for the class for the year. A rel case of Aesop’s Hare and the Tortoise Race as I got there by entering reasonable trees every month whereas some members had entered some fantastic specimens but only on odd occasions , thus letting the plodder get to the front. 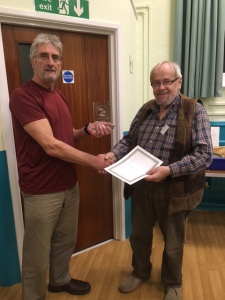 Bonsai enthusiast and artist. After recording the rural scene in watercolours for over thirty years and having my own studio gallery I am now semi retired. I still sell my prints though to customers worldwide via my website and through the Somerset Crafts Gallery, Avalon Marshes Centre,Westhay nr Glastonbury BA6 9TT. The rest of the time is spent looking after my bonsai trees, I like the exercise.
View all posts by Michael Cooper →
This entry was posted in BLOG, Bonsai, White Pine and tagged Bonsai, Bonsai Club, Pines. Bookmark the permalink.