Mainly Bonsai on a Budget 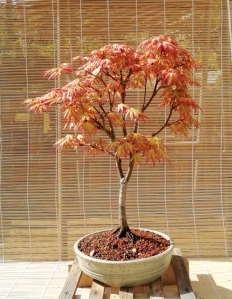 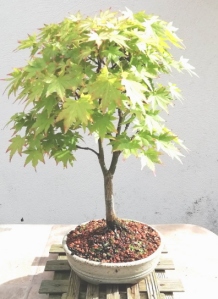 Since  my last report showed some of  the more dramatic improvements in of my young trees  I have been looking at the log book of the rest of my trees.
The Acer above and the group below are the result of a Morrison’s Supermarket purchase in 2014 for only a few pounds, they give a fine display of colours throughout the seasons.
This last summer I have been very careful to let them have only a limited amount of sunshine, situated in shade or semi shade most of the time and even now in October there is no sign of leaf burn by sun or wind. Leaf burn is actually caused by an interruption to the upward water supply in the tree causing an air lock like situation so water,water.water is the best way to prevent it in Acers during a fine hot and or windy summer. 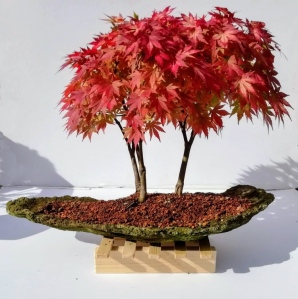 Another  penny pinching pensioner’s purchase from Morrison’s  was this little Cotoneaster in July 2014. First placed in a larger flower pot for some time in 2016 and then gradually lowering the level of the compost before  wrapping the roots with cling film around  a couple of local rocks from our garden. Now it’s looking very promising with the little topnot twig being the start of a new canopy of foliage above.

This tree was given to me by a fellow artist who had some space on my stand at the Bath and West Show in 1990 and it performed so badly that it was eventually chopped about in despair and was relegated to the odds and ends section with nothing ever to be expected from it.

There was only one visitor to the garden that really appreciated it.

It has however had some slight revival but is not one of my favourite trees.

Despite a friend frequently saying ‘I think I can see some flower buds Mike’ it has never bloomed and with my Hawthorn has  joined the trees in my special selection of never blooming flowering bonsai.

This nice little Hawthorn was taken from my daughter and partner’s garden in Wiltshire in late summer 2014. It was virtually just a whip of a tree about three or four feet high, growing  amongst the flowers, which we took back to Somerset potted up and in cut off about 8″ from the ground. 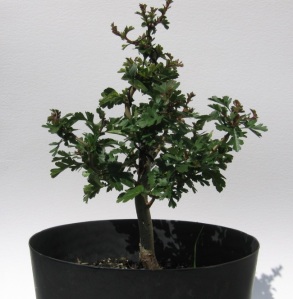 As this Hawthorn is relatively young there is hope about blossom one day unlike my other windswept one which I have had since a seedling in 1987 and I am still waiting.

Just to prove that I do have some trees that do flowers successfully these two well justify their place on the wall out side the kitchen window for us to enjoy their splendid spring time display and reassure my dear Wife that the twigs in pots can sometimes progress to greater things.
I hasten to add that these trees  were on my penny pinching list, the Wisteria was purchased from a fellow club member who had just returned with purchases from an auction and felt he had to part with something to ease his mind and the Crab Apple was another anniversary present from my Sue, I think I should perhaps get her a long service medal for marital endurance and bonsai tolerance. 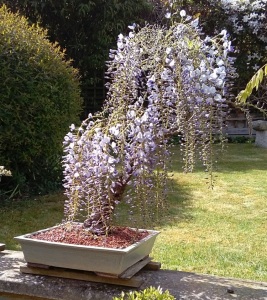 Bonsai enthusiast and artist. After recording the rural scene in watercolours for over thirty years and having my own studio gallery I am now semi retired. I still sell my prints though to customers worldwide via my website and through the Somerset Crafts Gallery, Avalon Marshes Centre,Westhay nr Glastonbury BA6 9TT. The rest of the time is spent looking after my bonsai trees, I like the exercise.
View all posts by Michael Cooper →
This entry was posted in BLOG, Bonsai and tagged Acers, Cotoneaster, Crab Apple, Hawthorn, Wisteria. Bookmark the permalink.

1 Response to Mainly Bonsai on a Budget