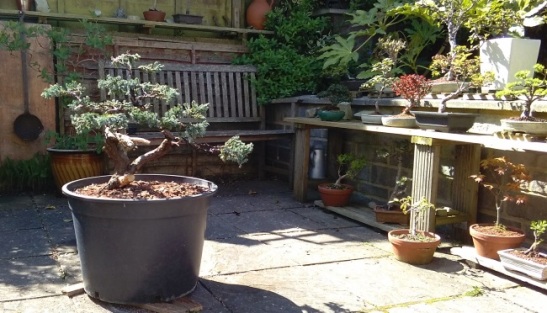 Now left to my own devices without Taunton and Somerset Bonsai Club mate Adrian to give me advice I  carried on tidying the tree up,removing hundreds of dead needles one by one,dead and small damaged branches. 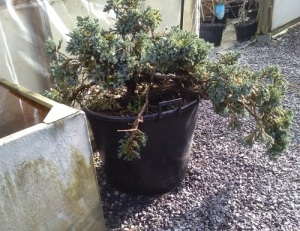 Then I started started preliminary wiring and trying to get straight in my mind what I was doing, or at least trying to do. 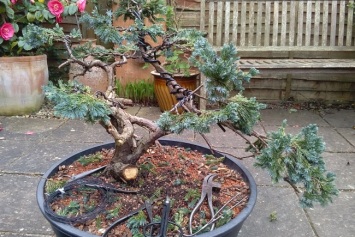 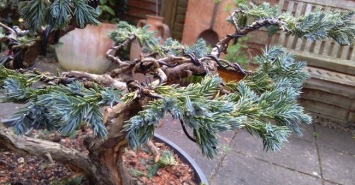 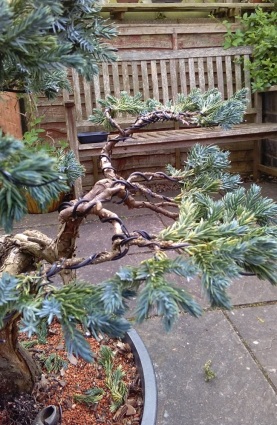 Removed much  upward and downward growing foliage and tried to create shapes that would allow light through to the growth beneath. At least I am beginning to see what I think may be the front now which is a help. Rather concerned about the very top which is very weak with a small split in the tip of the trunk which may hamper growth there.  May have to chose between the next two alternatives 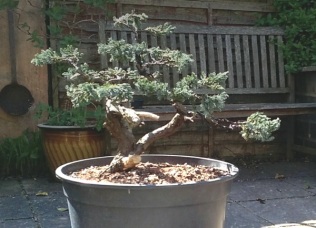 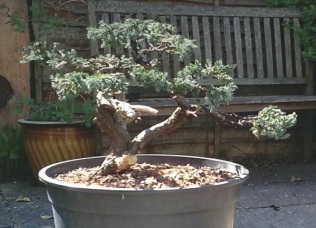 A.   Has the weak top which if it grows OK gives it a bit of height,which I quite like.

B.   Is a computer Paint possibility  to wonder what it would look like with a lower top.

Do let me know what you think

Next  there are the Jins to work on and to carry on saving for a large pot one day .

I  notice in my photos that some needle areas seem to have been knocked a little out of place whilst taking the pictures
and as I said, preliminary wiring, I realise it needs tidying up somewhat,just needed to see the wood for the needles.

Previous posting of this project are

Juniper Project Phase 1  February 16th -The discovery of the tree and getting it home.

Juniper Project Phase 2  March 18th  – Getting down to serious work.

Bonsai enthusiast and artist. After recording the rural scene in watercolours for over thirty years and having my own studio gallery I am now semi retired. I still sell my prints though to customers worldwide via my website and through the Somerset Crafts Gallery, Avalon Marshes Centre,Westhay nr Glastonbury BA6 9TT. The rest of the time is spent looking after my bonsai trees, I like the exercise.
View all posts by Michael Cooper →
This entry was posted in Juniper, My BLOG, Uncategorized and tagged Junipers, Tree Progressions. Bookmark the permalink.