Finished last year off with a new tree when Susan gave me a lovely sturdy Crab Apple for my birthday in December. I have had a so called Crab Apple for over thirty years and the rotten little thing has never flowered at all so all my hopes are now pinned on this new addition to the collection.

And what is worrying me now is that it seems to be belting ahead, the buds are getting bigger and bigger and certainly some seem to be flower buds so that is good but it is only January. Wiser bonsai heads than mine have told me not to worry and that they are sturdy

trees and it will be OK, in fact not to take it in under shelter as that will only encourage it to get further ahead too early, just keep it under some partial cover and fleece on any hard frosty nights.

So this year I should have quite a few flowering trees which is something to look forward to.

My dear sons Julian and Ben both gave me vouchers for Kaizen Bonsai for Christmas so I have spent some time on their website trying to make up my mind as what to buy.Tools and equipment or more trees? As it is not often I have the chance I thought it best to go for a tree and was just about to press the “Add to my Cart” when the tree I had been thinking about buying all day suddenly disappeared off the website in front of me as I was watching. Grrrrrrr bitter words.
Still it all turned out for the best when I saw them add five new starter trees to their catalogue a few days later, they were Blue Atlas Cedars which are quite scarce evidently,a fact I checked out on various worldwide bonsai websites. Having learnt my lesson before  this time I did not hesitate and ordered two of them at once and it is just as well I did for only a few hours latter they had all gone.

Kaizen packed them beautifully and as they say on their website, their trees are usually better than their photos suggest and they were right, I am really pleased with them and am looking forward to developing them over the years. Of course I have had to fight off requests from Sue to use one for the garden but the size they could grow to in open ground is more than our little corner of Somerset could stand, that is my excuse and I am sticking to it.. 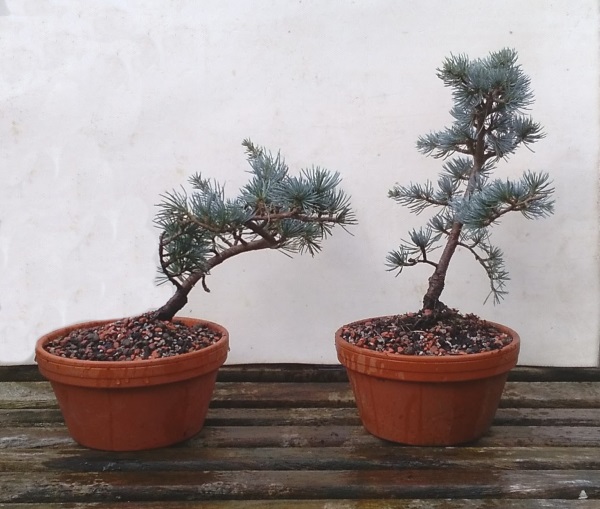 For the bonsai newcomer- These are not bonsai trees,yet .They are starter material which some would plant out in the open for faster growth or train in their pots, pots which are deeper and larger than bonsai pots would be for trees of this size. They will need shaping through pruning and wiring and encouraging growth where you want it to be and a healthy fertiliser regime during the growing season.Then after a few years one might call them bonsai as opposed to starters.

Bonsai enthusiast and artist. After recording the rural scene in watercolours for over thirty years and having my own studio gallery I am now semi retired. I still sell my prints though to customers worldwide via my website and through the Somerset Crafts Gallery, Avalon Marshes Centre,Westhay nr Glastonbury BA6 9TT. The rest of the time is spent looking after my bonsai trees, I like the exercise.
View all posts by Michael Cooper →
This entry was posted in Cedars, Crab Apple, Uncategorized and tagged Bonsai, Cedars, Crab Apple. Bookmark the permalink.