With a little bit of help from my friends
Our bonsai club organised it’s first all day workshops this year and I attended one earlier this month and took along a couple of trees to work on. The advice from the two club ‘elders’ Ade and Roger was really worthwhile. Some of the work was what I always thought needed doing, all I needed was the encouragement to take what seemed like very drastic steps and how to do it properly, other work was the result of someone seeing my trees with a fresh eye and pointing out a new direction I might consider taking with a tree.

Link to Ade’s notes on the workshop   April 2016 workshop

Inspired by Robert Nocher’s recent posting on his site I have tackled an air layering  of a Cottoneaster Franchetii that happens to be in our garden, not the smaller leaved cottoneaster I know but it is here to hand.The photo where I have cut back the bark shows that the task is not quite complete as I still had to continue to get the gap in the cambium layer clear down to the wood layer beneath all the way round. Let’s hope it works and I can do a posting later of a successful project. 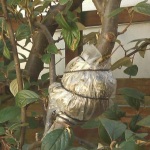 And here is a link to Roberts Air layering posting

Bonsai enthusiast and artist. After recording the rural scene in watercolours for over thirty years and having my own studio gallery I am now semi retired. I still sell my prints though to customers worldwide via my website and through the Somerset Crafts Gallery, Avalon Marshes Centre,Westhay nr Glastonbury BA6 9TT. The rest of the time is spent looking after my bonsai trees, I like the exercise.
View all posts by Michael Cooper →
This entry was posted in Uncategorized. Bookmark the permalink.