Every now and then it pays to take fresh photos of ones trees in order to compare with earlier pictures of them, quite often it is  a surprise even to the owner to see the progress or in some cases the lack of progress. 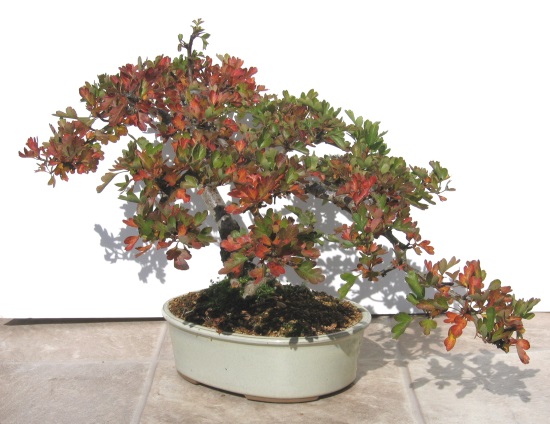 So with the summer coming to and end I have been waiting for the right day to get the camera out and this afternoon it was quite bright and relatively still, the last few weeks having  been good only for a few really windswept shots

Japanese White Pine
I have had this tree since 1987 when I acquired it from the widow of a collector.Sadly I rather neglected whilst I was busy with the gallery and working hard.The result was that couple of years ago it was turning more into an evergreen bush rather than a bonsai. Since then with lots of help from Taunton and Somerset Bonsai Club member Adrian I have taken it in hand and as you can see it is beginning to look a lot better.Cheers Ade.
Height 19″ Needles in groups of 5.
This pine had a very ugly graft with a great knuckle of wood where the join was, I have tried to lessen this by carefully chamfering the joints into each other which has improved it enormously. 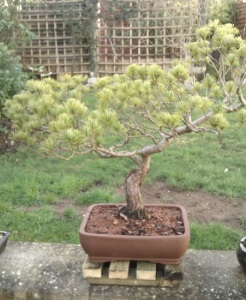 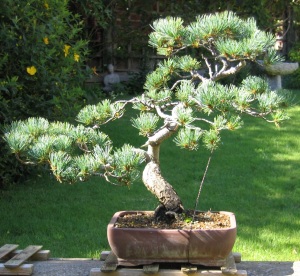 The work on both the above trees involved pruning out unnecessary branches, wiring or moving with guy wires branches into better positions, creating pads of denser foliage by wiring even the smaller twigs and carefully selecting the buds and candles of needles you wish to encourage and feeding more this year to restore the health of the trees.
You can see one of the guy wires on the White Pine pulling down the top of the tree where I am trying to create a domed pad of needles at the top like a mature tree. I will probably feed both trees less next year and not water quite so much in order to reduce needle sizes.

Hawthorn
I have grown this thirty year old tree from a little seedling a customer gave me in a plastic coffee cup. I tried to shape it into a windswept sort of shape, not entirely successful as I wired in curves  one plane only now I would know better  and whilst curving a branch down say I would also put in a left/right or right/left curves. Height 10″ The little spur of growth visible on the top of the right hand photo is where I want to train some growth up next year to raise the crown of the tree.

Scots Pine
Another pine from the same collection as the White and Black Pines this was a very sad looking tree with two branches coming out of the trunk at right angles opposite each other and then turning up again at 90 degrees totally symmetrically, sort of candelabra shape. not good in bonsai terms. Scots pine needles are arranged in pairs and it can be identified from other pines by tearing through across  a needle and seeing if it has a hairy sort of texture in it. The style I am striving for now is referred to as Literati and is considered to be one of the most aesthetic of bonsai styles. Having restricted bud growth at the tips it is now back budding and should soon have a couple of areas of quite dense foliage.Height 19″

Cascade Juniper
Another tree that suffered for years of neglect  during it’s thirty years. When I say neglect I did water and keep most of them alive I just did not apply myself to their styling as bonsai trees as I should have done. This tree was a very small Juniper from a garden centre probably one of the prostrate varieties I think. During the last couple of years I have been training it as a cascade tree with a number of clouds of foliage in layers down the tree. Cascade trees descend below the level of the pot rim. There are some small Jinned branches on this tree where I have removed the bark on branches that have no foliage on to give the appearance of old weatherbeaten wood such as  one might see on a tree on a seaside cliff  or mountainside. TreeHeight 12″. Pleased to say it came joint first in our club monthly competition in the novices class. 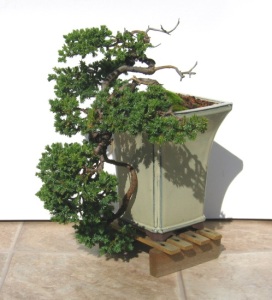 Pyracantha
Another thirty year old started from garden centre stock as you can see from the latest photo I have repositioned it to lower the profile almost to a semi cascade style. One has to keep an eye out for scale insects with these trees.Height 6″ 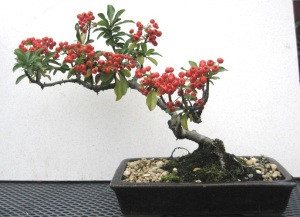 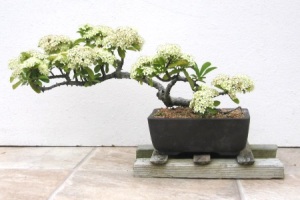 Bonsai enthusiast and artist. After recording the rural scene in watercolours for over thirty years and having my own studio gallery I am now semi retired. I still sell my prints though to customers worldwide via my website and through the Somerset Crafts Gallery, Avalon Marshes Centre,Westhay nr Glastonbury BA6 9TT. The rest of the time is spent looking after my bonsai trees, I like the exercise.
View all posts by Michael Cooper →
This entry was posted in Bonsai and tagged Bonsai, Hawthorn, Junipers, Pines, Pyracantha. Bookmark the permalink.