The King of the Moors

‘That is not The Old Man of the Moors’

I was told by a farming

customer as he read the title of my painting of Old George on South Moor. ‘That’s the King of the Moors.’
A few years ago most folk round here that ever drove to Baltonsborough across South M0or will remember getting stuck behind old George as he wobbled his way along the road in front of them.

Anyone careless enough to cut him up too closely with their car ran the risk of him attacking their vehicle with his trusty walking stick as he made his way to his lonely little red brick cottage on the moor: where he had no power or running water and I am told that some of the Meals on Wheels ladies were quite terrified of him. The local farmers used to pay George to keep an eye on their cattle grazing on the surrounding pastures.Which may well account for his home being known on the OS maps as Watchwell House, possibly the home of generations of cattle watchers.

I have heard that up North they refer to such characters  as ‘The Looker’ and that when any cattle they ‘look’ over are sold they get a share of the price. 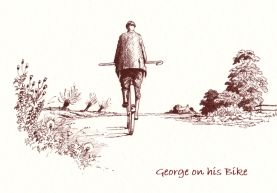 As the buying up of old run down cottages became very popular more than one townie,thinking George’s place was a deserted and derelict ruin ready for modernization, had a hell of a shock as they tried to clean a portion of window  with their hand to peer in, only to see a weather beaten old face peering back at them, shaking a fist and telling them to ‘b….roff.’

Legend has it that one dear lady having made George swerve into the rhyne (Ditch or Dyke, elsewhere in the country) had a real shock when she got hold of his leg to help him and his prosthesis came off in her hand.
However they were only down the road from Butleigh Cottage Hospital and they say that she needed more treatment for shock than old George needed for his injuries..

As an habitué of the Greyhound at Baltonsborough or The Rose and Portcullis at Butleigh George I am also told was even known to adjust his limb with binder twine at the bar.

On finding him lying in the road one day, having taken liberally of Somerset’s own amber liquid, another farmer shoved him in the back of his Land Rover and took him off to the care of his niece, who promptly administered more cider in an effort to bring him round.

Obviously I have no substantial proof of the stories of the ‘King of the Moors’ they are just what various customers have told me over the years and quite probably embroidered  in the telling. So I trust that any descendants of George will take this in good humour as a tribute to a local legend.

My picture ‘George Counting Cows’ is no longer in print I’m afraid, it was not taken from life, it is just a memory image of George as he leant over the gates along the Baltonsborough road at South Moor watching the cows

Bonsai enthusiast and artist. After recording the rural scene in watercolours for over thirty years and having my own studio gallery I am now semi retired. I still sell my prints though to customers worldwide via my website and through the Somerset Crafts Gallery, Avalon Marshes Centre,Westhay nr Glastonbury BA6 9TT. The rest of the time is spent looking after my bonsai trees, I like the exercise.
View all posts by Michael Cooper →
This entry was posted in Anecdotes and tagged Baltonsborough, Cider, Glastonbury Tor. Bookmark the permalink.

1 Response to The King of the Moors